Guru Purnima is a day to honor the teachers, or ‘’gurus’’ in our life. In the Hindu calendar, it falls on the day of full moon, Purnima, in the month of Ashadh, which is usually June or July.  It is traditionally celebrate as Guru Purnima by Hindus. Also refer to as Vyas Purnima, the day is well known in remembrance and veneration to sage Ved Vyas. He is the Adi (original) Guru of the Hindu Dharma, On this day, the Guru is offere Pujan (worship)by the disciples. Guru Purnima (Asadha Purnima, Vyasa Purnima) is a festival. Where many Hindus and Buddhists pay respect to their Guru or spiritual guide.

Hindus celebrate Guru Purnima within the honor of the great sage Vyasa. Who was born on this day to sage Parashara and fisher woman Satyavati. He is author of the Mahabharata and the Puranas. He is said to have divided and edited the Vedas into the four parts that are known today. Guru Purnima day is thinking to be auspicious for seeking the blessings of Ved Vyasa . Who is consider to be the ‘’Maha Guru’’. His blessings are believe to dispel the darkness of ignorance. And usher in the light of knowledge. A guru is a personal teacher or guide who has already attained spiritual insight. They are often consider as a link between the individual and the immortal. Guru Purnima is the day to honor your guru, pay your fees, and give them presents. He is seen as the original Guru of the Hindu Dharma.

According to Buddhist lore, this is the day that Gautama Buddha delivered his first sermon to his first five disciples after which his ‘’sangha’ or group of disciples was formed.

According to Jain history, this day is celebrate to venerate Lord Mahavira. Who became the Guru to Gautam Swami, his first disciple, on this very day.

The feet of the guru is a very important part because all nerve currents terminate within the feet where vital energy points relating to every organ of his physical and inner bodies are there. Touch the feet and that we touch the spiritual master. Worshipping the feet of the guru is also an acknowledgement of one’s respect and knowledge that by following his footsteps we will attain spiritual perfection.

Offerings on this day include flowers, fruits (a lime is traditional) and a piece of unstitched cloth for renunciate gurus. These items are present in a basket or on a metal tray, as well as a dakshina, which is a monetary gift wrap in a betel leaf. In ancient days, gurus received gold from the king and cows from the wealthy in hopes that their schools would sustain and that they would freely share their wisdom. Guru Purnima is celebrate in different ways among people of different faiths.

Hindus celebrate Guru Purnima also as ‘’Vyasa Puja’’. Mantras are say to venerate the Maha Guru and seek his blessings. Devotional songs and hymns are say throughout the day. The Guru Gita, a holy text, is also speak in memory of the Maha Guru. Flowers and gifts are give and ‘’prasad’’ is distribute, sometimes called as ‘’charanamritha’’- literally nectar of the feet, the symbolic wash of Guru’s feet..

In some ashrams, a puja of sandals(Paduka) is conducte, believing it to be that of Sage Ved Vyasa. Others visit their own spiritual gurus and rededicate their lives and spiritual paths to them. Some also start their spiritual journey or studies on this day by giving an offering called ‘deeksha’ to their gurus. on the day of Guru Purnima, disciples introspect, and resolve to supply pujan and reverence to the Guru in mind, action and speech; implicitly obey his unvoiced wishes, commands, serving him as one would God and lauding his glory and redemptive attributes. Guru Purnima in Buddhism: Buddhists celebrate Guru Purnima by conducting a ritual called as ‘Uposatha’. They honor the eight teachings of the Buddha on this day. Many Buddhist monks use this day to start on their journey of meditation. They also start other ascetic practices on this day.

What Do People Do?

Many Hindus and Buddhists observe Guru Purnima by visiting a temple and giving floral offerings and symbolic gifts. It is customary to fast and spend the whole day in prayer to seek the guru’s blessing. The festivities are usually follow by a feast where kripa is distribute. Many focus and meditate on their guru’s teachings and expressing gratitude for his blessings and guidance. Special recitations of the Hindu scriptures are read all day to honor the remembrance of all gurus. As well as singing of bhajans and religious hymns. Many organize a special kirtan session and haven so devotees can gather at the ashrams, matha or place where the seat of the Guru exists.

The primary activity for Hindus during Guru Purnima is the ritual of puja, which honors the Guru’s holy feet or a pair of his sandals (Paduka). This ritual can be seen as a way of rededicating the significance of the Guru . And recommitting themselves to follow their teacher’s guidance and teachings for the coming year. The puja is a grand event in many areas and is precede by a festive procession. Secular Traditions: In schools, colleges, and other educational institutions around the country, present and past students visit their teachers and greet them with tokens and words of gratitude and respect. Poems are recite and the teachers give their blessings to the students. Competitions are also conducte for these recitations.

In short, Guru Purnima is  celebrate as Teachers’ Day from ancient times in India. 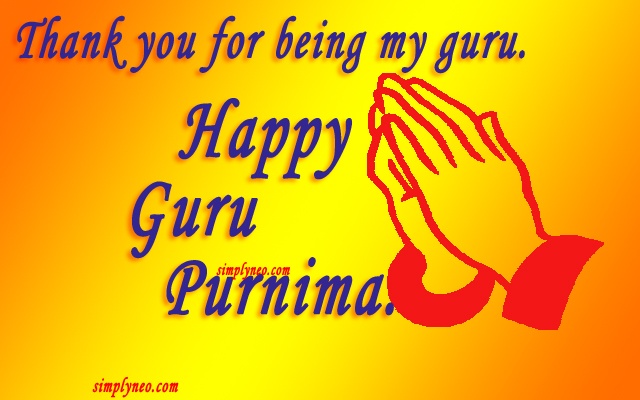